There is something quite special about getting to sit in on a rehearsal during hell week. The elements coming together and merging into the vision of the director and the team they lead. As a reviewer I prepare to observe the work the actors, crew and production team bring forth, their well-prepared offering.

The Darling Buds of May 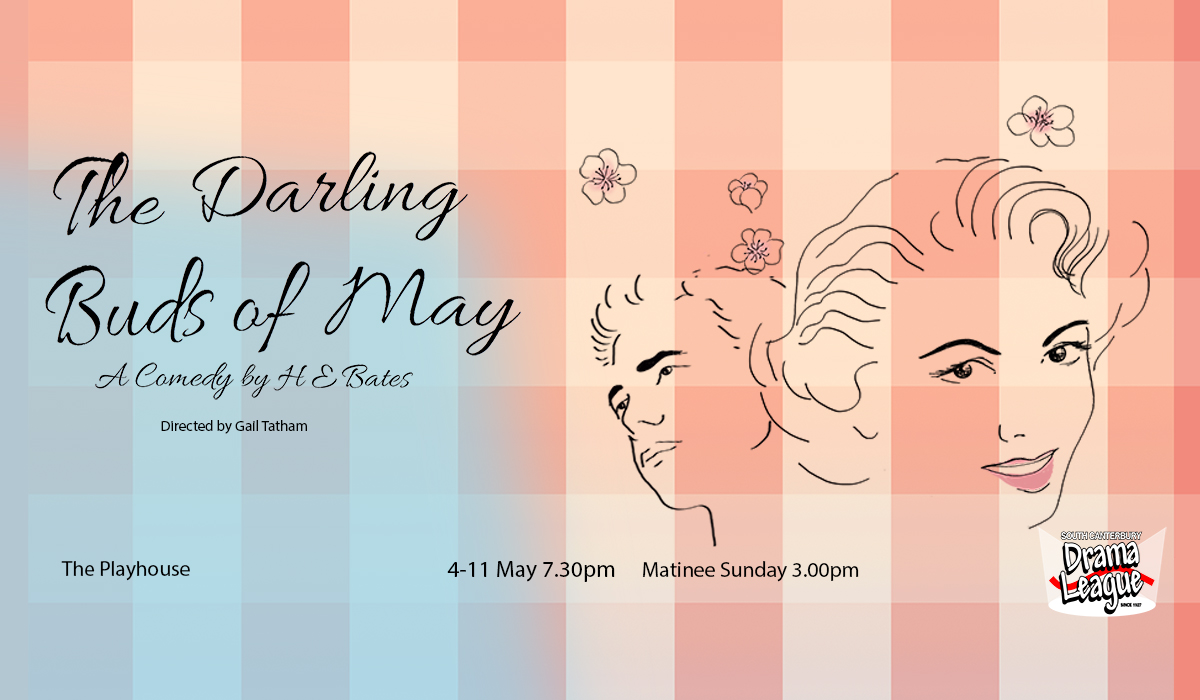 Take a reasonably well-known story, set 60 years ago in rural Kent, England, and people it with eccentric yokels, and you have the makings of an engaging comedy. The Larkin family apparently have a legitimate business, farming, but it brings in an amazing if undeclared income, thanks to the machinations of the adult members. Pop, played here by Dave Mortimer in a stand-out performance as a shifty yet open entrepreneur, is ably assisted by the equally amoral Ma, played delightfully by Annette Farr, but the story-line centres on eldest daughter Mariette, the lovely Isabella Wilkie, falling in love with the oh-so-earnest ‘Charley’ the tax investigator, played by Alec Muir. Their roles enliven the play, starting with mere flirtation on the part of Mariette, through a fight with a rival, Pauline Jackson (Molly Callaghan), a scheme to have a baby, then to set up house to make everything ‘perfick’. The main characters, ably assisted by the young Larkin siblings (April Manson, Trey Cosgrove, Maddison Frame, Ruby Ballantyne, Lucy Flynn), also have interactions with village identities, including Jon Harris as the brigadier, Shelley Casey as the amorous Miss Pilchester , Lizzie Dawson as Angela Snow, the Bluff-Gore couple (Jeff Mill, Angela O’Reilly) and Mark Richardson as the befuddled tax inspector.

Variety, a Kiwi Comedy is certainly a unique musical, and the Mill Theatre section of the South Canterbury Drama League is to be congratulated for putting on such a rollicking show. Written and directed by Catherine May Smith, this pre-Christmas production has an eclectic atmosphere – there’s almost a feel for The Rocky Horror Picture Show, plus slapstick and vaudeville. Ms Smith has obviously trained her cast and backstage to make this a fast-moving and highly colourful comedy. The plot is whimsical, with two competing prima donnas in a quasi-political local milieu creating the sparks to generate the song and dance routines that enliven the stage. And here is the flair of Matt Deavoll, as music director. To have a dozen actors belting out such numbers as Poi-e, Hit me with your best shot, and I see red, is quite an accomplishment, particularly when tight choreography is involved too; the resultant items come with good volume, clear enunciation, and relentless movement.

“Cut! is the latest South Canterbury Drama League offering, and it’s certainly a little gem, bringing out to the fore the best of our local acting talent. So, thanks to the direction of Stefanie Crawford and the usual high standards of her backstage crew, it deserves our full support. The story-line of this cunning detection thriller, set in the 1930s, while naturally not inconsequential (the actual culprit varies from night to night!), takes second place to the script, which is replete with puns, doubles-entendres, and fast repartee. With Ms Crawford in a demanding role as a stuffy police inspector, aided by Leo Argent as her not always uncomprehending sidekick sergeant, the second half of the drama unfolds quickly. However, in Act 1 we see the true worth of a largely well-known cast, headed by Kevin Foley as the manipulative, villainous owner of the mansion-cum-film set. His guests include David Mortimer as an equally scandalous bluff (and bluffing) army major, Vivien Leslie as a proud but apparently fading star of some dominance, Laurie Shanks as a bumbling German brought in as a technical SFX expert, Grant Shimmin as a rather ratbag vicar, and relative newcomer Stevie Gallagher as a flirtatious but airhead ingénue; however the main scene-stealer is the wonderful Annette Farr, in possibly her best role in the League, a real Mrs Malaprop, a veritable Mrs Mop, a true bell-ringer, bowing and scraping to all except her scoundrel of a master. The interplay of these characters is continually in motion, their stage presence swinging around a well-constructed set. For sure, the play is dated in appearance, but it zooms along and evinces many laughs a minute. Listen carefully as a sleuth in the audience, and you will be well rewarded.”
• Gordon Prowse, 14 March 2019

The Junior section of the S.C.D.L. presents the gorgeous tale of G2K ‘Cinderella’ by Rodgers and Hammerstein, designed for youth performers as part of their Getting to Know series of musicals, perfect for young theatregoers.

As soon as the pretty and sweet Cinderella, played by Rebekah Frame, sings her delightful song ‘In My Own Little Corner’ you want her to have her happy ending. Enter the sassy and fun fairy Godmother, (Lily Shields) with a sparkle in her eye and a dose of good advice with the song ‘It’s Possible’, a message that is woven throughout the show.
Neve O’Connor as the mean stepmother is a little deluded over her daughters’ Portia, (Logan Clarkson) and Joy’s, (Josh Dalloway) ability to attract the Prince’s attention. This trio shines a light on the unattractive qualities of the step-family beautifully.
The King, (Nico Cousau) has some fun banter with his wife the Queen, ( Ayla Preston) and then of course there’s the Prince played by the charming Ethan Chittock.
This cast is full of musical talent and the ensemble work hard, each having their moment to shine as villagers, mice, servants, footmen, Herald, Chef and the magnificent horses. Mention must be made of the two jesters, Nico Lee and Bridget Walker-Grant, whose sense of fun and comic timing were a joy to watch.

Adding to the layers of this enchanting tale is the skillful lighting design which, along with the gorgeous costumes cleverly put together by Penni Naylor and Maree Casey, create an overall stunning visual experience.